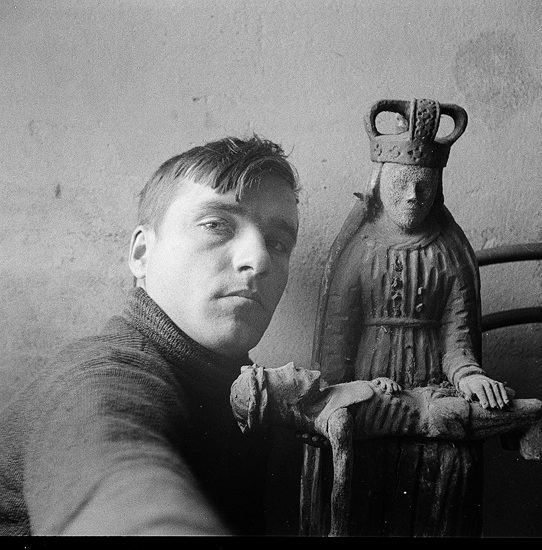 Vytautas Jurkūnas (1910–1993), an established name in Lithuanian graphic art, is known to many as a talented illustrator of books. In Soviet times, he taught at the State Art Institute of the Lithuanian SSR for many years, nurturing more than one generation of graphic artists. However, the artist’s early and wartime career, spanning the period of 1929–1945, has remained relatively obscure.
During the interwar time Jurkūnas created important works charged with social criticism, and works on the subject of war. Also, his oeuvre includes the first modern cycle of prints entitled Fishermen (1937–1939), an artwork of truly national significance. Later, at the end of the Second World War, he produced a cycle called Brutalities of Hitler’s Invaders (1945–1946), one of the most famous works reflecting on the experience of the war. The idea to rethink this period of the artist’s work was prompted not only by his two-pronged creative activity, but also by his hitherto unpublicised photographic archive, which belongs to the artist’s family. While the full extent of Jurkūnas’ photography is unknown, the archive contains more than 500 negatives and contact prints. His photography reveals new details of his biography and art; it also throws light on the phenomenon of graduates from the Kaunas Art School who were engaged in photography.

Graphic works, photographs and documentary materials featured at the show give an opportunity to take a more comprehensive look at the worldview of Jurkūnas and that of the 1930s generation of artists, who were greatly impacted by the search for national identity and modernisation processes.
The exhibition is accompanied by a catalogue, which offers extensive coverage of Jurkūnas’ early graphic works and his photography for the first time. Both the exhibits on display and the reproductions or the documentary materials in the catalogue were gathered from the archive of the artist’s son, Vytautas Jurkūnas Junior, as well as from the collections of Lithuania’s national museums and archival institutions.