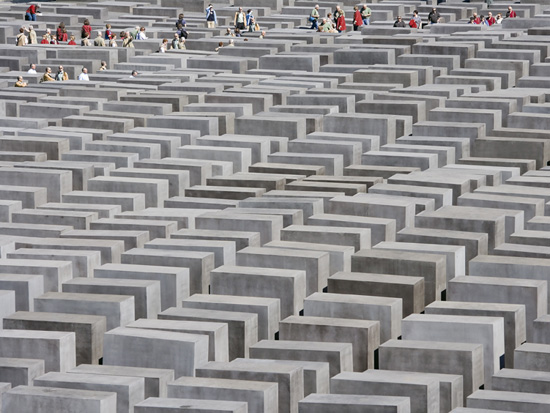 Art history has seen a series of different media and picture forms in which time is rendered visible. Specifically History Painting is one specific example where concrete historical events were deemed worthy of treatment due to their special importance, whereas the daily experience was for a long time considered too banal for illustration and initially found meagre space only in marginal areas of book illumination. It was not until the great age of Dutch and Flemish painting and graphics in the 17th Century that the everyday was finally established in art in the form of genre painting, and soon even landscape painting did not need the justification of a venue for mythological or historical themes.

The new photographs of Holger Luczak can be seen in the light of this tradition. They show people seeking recreation in Central Park in New York City, tourists at the beach promenade at Scheveningen or playing children in the courtyard of the Düsseldorf Art Museum K 21. Nowhere does anything unusual appear - apparently.

All the places Holger Luczak explores with his camera are public – these are meeting places, places that all different people – motivated by a common interest – to come together.

The complete casualness of everyday scenes also contains one very special aspect of his pictures that the viewer can easily overlook. This oversight can be due both to the subject of the picture and the technique of photography itself which, despite all our awareness of the many possibilities of manipulation, still has the aura of the veritable and the probable.

A special status, if for no other reason than its triple form, is held by the triptych "Holocaust Monument 1 to 3". This motive is again distinguished not least by the varied form of the grey concrete blocks of the Peter Eisenman design. This pictorial group is formed into a unit by the lines of the room depth, moving from the left to the right in the first picture, in the centre in the second and from the right to the left in the third. The flanking pictures also show visitors to the monument only on the upper margin, whereas the picture in the centre shows several people also in the foreground. Here we can see, amongst other people, a young man who jumps from the left to the right over a row of blocks and seems to be acting in conflict with the gravity of the place. The venue finally is also special from a historical point of view, as it was very close to this that those officials and Nazi grandees gathered to plan and order the mass murder that is being commemorated here. In fact, all of these places become in Luszak's pictures also places where stories intermingle and overlap; certainly not always in such tragic dimensions as in Berlin, but parallel to the meeting of people at these locations, who perhaps even return here several times.

The famous cemetery in Montmatre in Paris was the venue for a picture that is emblematic for the potential of Luczak's photographs. Various people meet at the grave of the poet Heinrich Heine, including a woman on the left, visible both in front of and behind a grave monument. It appears that she is being mirrored and in reality is encountering her own view. This motif, which also conjures up the myth of Narcissus, is presented here as the possibility of reflecting on one’s own position in time, which particularly in a cemetery also implies awareness of one’s own ultimate mortality.

Appearing casually in each picture, none of these motifs are random, and in fact they open up for us a discursive potential not restricted to the subject of the film fixed in the picture, but rather takes this as a starting point to lead us into new ideas and emotions.