Gediminas Pranckūnas. Across the Whole View 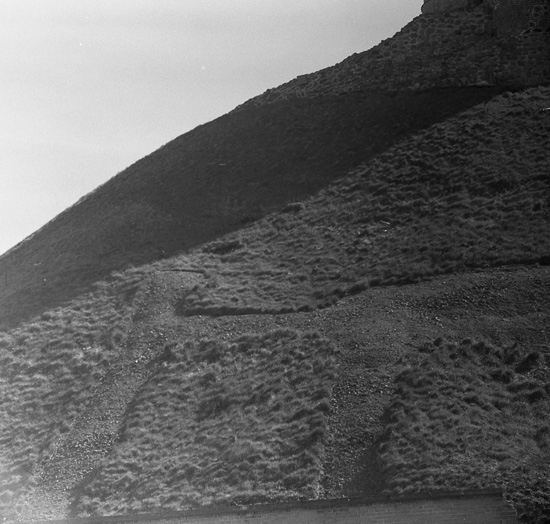 Gediminas Hill and its surroundings are historically significant as the city’s place of origin. In fact, it is not much of a hill, but rather a steep, cake-shaped mound. However, not unlike the seven hills of Rome, it stands as a symbolically significant defensive landmark. While acting as a place for occasional weekend visits and offering scenic views onto the ornate roofs of the Old Town, it also tends to blend in with the everyday environment and recede into the background as we go about our daily business.

Gediminas Pranckūnas discovered the Gediminas Hill as an artwork subject when its trees got cut down in 2013: “All of a sudden, it acquired a distinct shape and came into the fore, standing out as the dominant landmark, like a true throne hill that it is.” Pranckūnas used to go past the hill during his daily commute from Žirmūnai to Salomėja Nėris Secondary School. Back then, the vegetation on the Hill and its surrounding heights would blend into a single mass, but as soon as the Hill went ‘bold’, Pranckūnas found himself wanting to look at it through the camera lens. When his artistic interest has reached a certain level and the preparation work for the exhibition began, Pranckūnas started visiting the Hill nearly every day and, for the period of two years, tormented the curator with the overwhelming amount of material. The artist has been observing and experiencing the Hill all year around, painstakingly rediscovering its curves, shadows and vegetation, capturing its adventurous seasonal changes. Sharp as a post card image, this visual unit has thus been turned into a multifaceted, unsettled and many-faced character, not unlike the proverbial elephant from the parable about the blind men who groped about its different parts and claimed it to be a snake, a tree, or a fan.

In Pranckūnas’ photographs, the Hill becomes a surface, a screen, but never a representative whole. The series of images form an entirely new – and personal – mountain ranges. While the camera fails to capture the Hill in its entirety from up close, it conveys the impressions of closeness, even intimacy. Such intimate imagery makes us realise that we are all different, and this nuanced understanding seems to resonate as the main theme in Pranckūnas’ work.