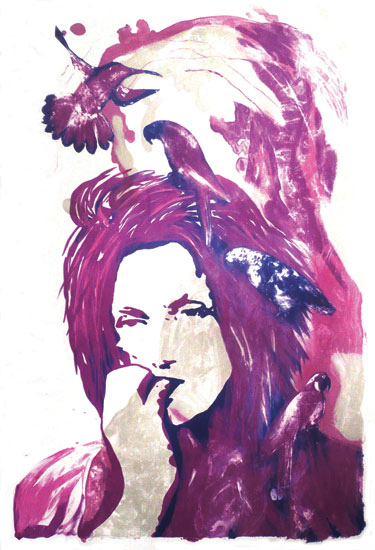 Exhibition of Finnish printmaking, “Drawn line – contours of art”, represents 8 Finnish artists, both established and emerging new artists. What unites this group is love to stone lithography. The exhibition in Vilnius brings out lithography’s many artistic possibilities to express. Beautiful washes, fine line drawings, photographic image and rich crayon drawing are just few of the possibilities lithography has to offer. Exhibition invites to take a peak at Finnish psychic landscape, helping the viewer with a few guidelines.
Andrei Bakharev’s themes for his works are the surrounding city landscape and its habitants, people. He likes to draw lonely persons, because he seems himself as one of them. Feeling of loneliness is a known feeling for people in bigger cities – lots of people, few friends. Bakharev’s works are often moments during the night – then you can be alone with the landscape.
Kalle Berg represents a generation of Finnish printmaking, who work between traditional craftsmanship and digitally produced image. His work as a printer is a source of ideas for his own artistic work. Berg’s works are beautiful, philosophical studies on color and form.
Annika Dahlsten is fascinated in stone lithography by the beauty and complexity of drawing, and the possibility of re-producing and altering something so momentary as a drawn line. Drawing with liquid ink is very spontaneous but the whole printmaking process is about building up the image slowly, layer by layer. She works with themes such as memory or solitude, often referring to art history or literature.
Leonora Fredriksson, a painter, simply loves drawing on stone. The stone doesn’t forgive mistakes, but Fredriksson beautifully uses the shiny surface of the stone. Her fine, fragile drawings are dreamlike visions, where nature and animals play an important role.
Matti Hintikka is a middle generation printmaker, who has always been focused on lithography. Hintikka uses combination of basic elements: stone, water, earth and air. His earthlike color palette refers to the connection to nature, which is so special to Finns. Hintikka’s works represented the landscape, both physically and mentally.
Kuutti Lavonen is interested in lithography, because it gives the possibility to draw and paint at the same time. Lavonen’s inspiration is the Renaissance and Baroque art and he draws human face over and over again. Female saints and legends have now been joined by male faces in Lavonen’s art. Lavonen has painted a grand series of biblical studies in historical Tyrvää St. Olaf church which has been opened this summer.
Elina Sipilä, artist from Lappland, works with painting and lithography. In her works she uses the rugged northern landscape to evoke questions of memory and identity. Painterly works are printed layer by layer to achieve to new dimensions both in color and image, in emotions and interactions.
Kaisu Sirviö is a master on elegant and strong brush strokes. She paints with liquid ink on stone, very spontaneously but firmly and is able to produce a whole variety of tones and textures. The themes of her works are expression of nature, organic and ornamental.