Fabrizio Contarino. The Opposite Sea 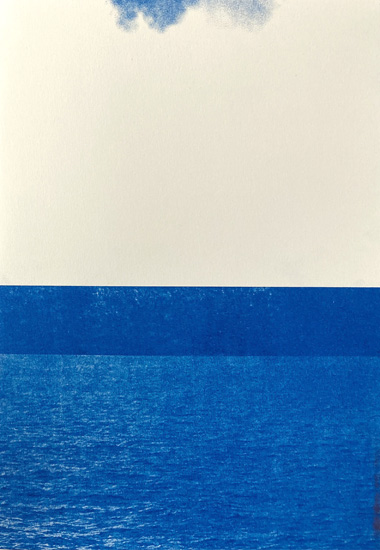 “The opposite sea” places us between waters – between those of the Mediterranean Sea – and opens us to the contemplation of its infinite depths and movements. The sea is a space of transit and at the same time a space of conflict, a space of exchange and a space of death. It is both a door to freedom and a frontier.
Fabrizio Contarino offers us different visions of the Sicilian Canal, a 145 km long passage that separates Sicily and Tunisia, Europe and Africa. For him stopping to observe this fragment of sea, from the Italian coast, is a recurrent exercise. This vital experience he proposes to share with us through an exhibition display in which audiovisual installations where marine cartographies and wavy silkscreen coexist. The artist also uses cartographies to delve into the depths of the seabed, its mountains, its abysses and its temporalities. His gaze evokes all the paths, currents and migratory routes that have furrowed this fragment of the sea for centuries. Through these installations, the sea is approached as an abysmal and hypnotic space, as a place that traps us in a contemplation that could be postponed to infinity. With the repetition of the same fragment of the sea, the theme of migration is approached in an emotional and poetic way, recreating the sensation of a mirage or the vertigo of finding oneself adrift.
In a poetic and subtle way, “The opposite sea” is an open and paradoxical invitation to consider what the opposite side of the sea means. This question aims to open our perspective with respect to what we are seeing and how we are seeing it, specifically in
relation to the sea and how the migratory imaginary that crosses it is generated. Is an “opposite side” of the sea possible? And, if so, how could we inhabit it? From this complex and uncomfortable space, the artist confronts us with the possibility of breaking down prejudices and starting to elaborate together another migratory imaginary, to project another look towards the sea.

Fabrizio Contarino (Italy 1976) lives and works in Barcelona. His work is mainly focused on drawing, photography and video installation. The artist’s creative imagination develops through the search for a wide range of images charged with irony and social criticism. His work focuses on themes related to landscape and memory. He has participated in numerous international exhibitions in Europe, Asia and South America. Contributor to the magazine Rojo from 2002 to 2011. He is co-founder and artistic director of Espai Souvenir (Barcelona), a space for artistic and cultural collaboration.