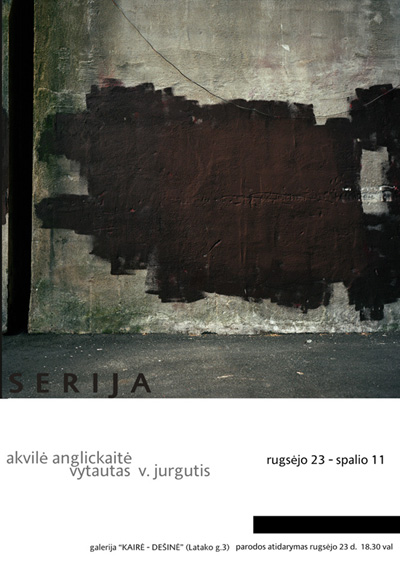 An exhibition “Serija”/”Series” presented photos by Akvilė Anglickaitė. It was opened and took place on September 23, 2008 in the gallery “Kairė-Dešinė”. In her recent photos, the artist Akvilė Anglickaitė represents not only herself, but her generation as well – the generation, which suddenly became concerned about space. The space in which it lives and functions. The generation, which feels anonymous mechanisms even in a free world. It feels the action of mechanisms that persistently frame, imprison, and normalize this space. Therefore the author of photographs as if saves anonymity. Her relationship with an object of a reflex does not have one single meaning. It is a dissociated fixing, “without any passion” and at the same time a rather sharp (but paradoxically not aggressive) social critics.

An exhibition “Serija”/”Series” talks about emptiness. “Annihilated” graffiti is fixated in photographs, reminding of abstract painting by their form, which some time ago deleted realistic scene. This series of artworks is a link to serial music, which also deleted realistic things in music. It started choosing certain sounds, fiddled with a mathematical accuracy, as composition principals. An inseparable part of the photography exhibition of Akvilė Anglickaitė “Serija”/”Series” is a musical composition created by Vytautas V. Jurgutis “Serija”/”Series” , which will be playing during the whole period of the exhibition. 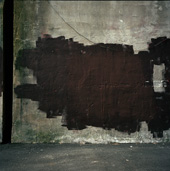 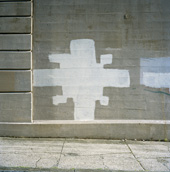