A presentation of a catalogue of a group of artists
“Baltos kandys”/”White moths”, celebrating the 10th anniversary of their creative work 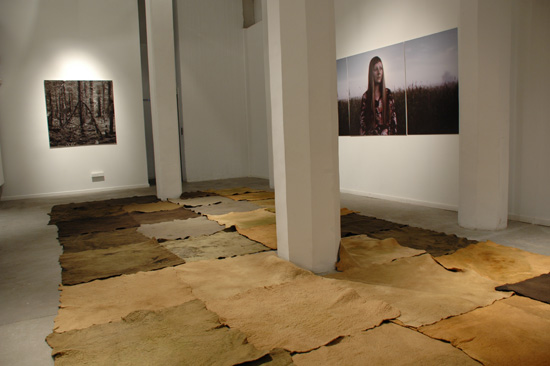 Guests from Latvia are going to participate in the event. One of them is a designer of the catalogue Dāvis Līcītis and Kaspars Lielgalvis, a co-author of the newest - yet not presented art project „Miškan“/”Into the forest”.

During the event visual material from the exhibition will be presented. The exhibition took place in August – September, 2008, in a modern art museum of Rosario city (Museo de Arte Contemporáneo de Rosario (MACRO), Argentina), where art projects were exhibited. That was the second exhibition in Argentina, presented by the group of 6 artists, celebrating the 10th anniversary of their creative work year. In July, 2008, the artists have presented their works in the centre of museums - Centro de los Museos de Buenos Aires. Their exhibition was opened by Mr. Jonas Jučas, Minister of Culture of the Republic of Lithuania. His excellence President of the Republic of Lithuania Valdas Adamkus also attended the event. The exhibition was organized by Lithuanian Embassy in Argentina in cooperation with Mr. Ruben Repšys, Lithuanian Consul of Honour in Santa Fe province.

Can Moths be White?

In the whole Eastern and Central Europe since 1990 a new abating tendency became significant. Young artists rejected individualism and joined into groups. They started to willingly take up a collective creation. If before that art creators used to form groups with an aim to propagate similar art programmes or organize similar exhibitions, so this time these junctions are much closer. A very important aspect of those groups – a joint work, from an idea to its final realization. A work of an individual creator disgorge into a collective project, although a creator can implement individual ideas in parallel as well. These new groups of artists do not confine themselves in one single field. They alternate traditional means of expression with actions of creation, video art, photographies, installations. Next to creative works of big format, the artists create small artifacts. They devote much attention not only to ideas but also to their impellent expression as well as their skills.

The women of the artist group are very mobile. They invoke new communications and their organization skills maintain international relationships. They are able to implement artistic projects of different kind in different time and in various conditions.

Groups of young artists of Eastern and Central Europe are united by an open cosmopolitan posture, oriented to widest possible field of artistic activity. A passive position of a waiting and being invited artist was replaced by active and organizational activity. Groups of artists propagate their art. Their members not only show themselves abroad, but also organize events in their home countries, looking for an interaction with foreign creators.

Members of this group are unrestful pilgrimlike beings, therefore reminding of real moths, who unrestfully struggle to each time new territories. Many more hints hide behind the title of the group. Firstly, the title hints to a means of expression chosen by the creators, which is a felt tangled, formed and dyed manually. It attracts them no less than the real moths, but as if “the white” side or form of them, positive one. The artists contrary to moths, create, but not destruct the material. These textile workers became interested in felt when studying in Vilnius Art Academy. Together with their lecturer, Eglė Ganda Bogdanienė, they have organized the international symposium about felt in Lithuania, in 1998. In order to know this technology better, they tried to get knowledge from primary sources. Therefore they arranged that symposium would be visited by a textile professor from Alma, Ms. Saolė Bopanova, who have told about her experience. She has been famous for many years in Central Asia for cherishing the old felt making tradition of Central Asia.

The group “Baltos kandys”/ “White moths” became really skilled in felt technique. Now they create not only traditional flat carpets, felt or pictures, but also innovatory apply felt for three-dimensional objects. Women tangle creative works which are big, of sculpture forms. They set creations in interiors, outside spaces in forms of installations consisting of tiny three-dimensional details from felt. With the same passion the artists experiment with colors. Lithuanian women replace traditional bright and contrast colors, graphics and many ornaments, so typical to Central Asia with bright, however interflowing colors as if in painting art, or sometimes choose to make monochromatic views. They neglect graphical outline threads which is characteristic to felts of Central Asia. The Lithuanians also experiment by specking the felt, using technologies which are known to be used for dyeing silk or cotton.

Rosemarič Trodul in her conceptual creative work used knitting. She has choosen this typically female technology ironically. “Baltos kandys”/ “White moths” – on the contrary, choose felt as having positive archaic traditions connected to a women’s activity, which is able to provide us with warmth, security, and possibility to express ourselves in a creative way. Therefore they devote much attention for felt relation with a human body. From this a tendency to various improvisations, playful elements, artistic actions arise. In most of created textile objects the artists reject autonomy of a creative work. They become symbolic attributes used in art actions. Particularly in these actions the attributes influence the constant change of art works.

All artworks by “Baltos kandys”/”White months”, including felt pictures, sculpture objects, space compositions, installations, actions, photography, video films, accessories, are united by bright soft materials, poetry of images, bright thought, idea, and happy mood. The creative work of “Baltos kandys”/ “White moths” remind of a celebrative ritual, which is full of happiness, energy, or game. They manage to deliver this to people. This way moths can be white.