Eglė Kuckaitė.
The Milk of the Female Saturn: Swarms in the Eye, Drums in the Ear 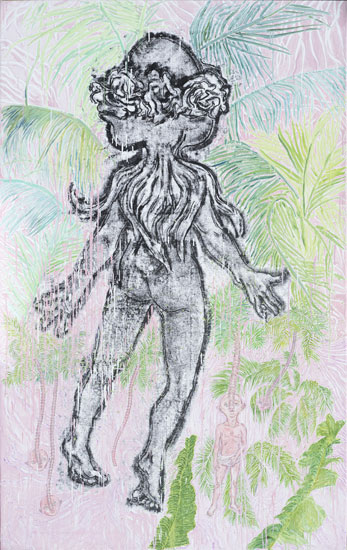 ‘I made these works after a trip to the Philippines. The signs of nature and human presence had captivated me. I merge the images of water, plants, fire, animals, insects and the human body with the contexts of art history, literature, and religion, visually arranging them into real yet sensory forms akin to symbols. The nuanced palette of the primary colours of the series – azure, rose, grass green – keeps the imagery in the sphere of the symbolic imaginary.
These works balance between sentimentality and irony. I let irony be a fairy tale plot. The sentiment worked similarly, making space for heavenly and rosy imagery. Raimondas Miknevičius, professor at Vilnius Academy of Arts, once showed us the Estonian printmaker Eduard Wiiralt’s works and asked: ‘You find it sentimental?’ It liberates that which is usually cropped by the mind.
The works making up The Milk of the Female Saturn are oil drawings on canvas combined with lithomonotypes. I draw bodily contacts between nature and humans, creating invented spaces and taking things out of context to sustain the uncertainty and speculation on the meanings. I trace biological recurrence as I draw the lines. Lines extract thoughts from the shape of things. Perhaps form is movement that took shape over a long period of time? Like nature’s text.’ Eglė Kuckaitė

Eglė Kuckaitė (b. 1969) works in the fields of printmaking, illustration, painting, wall actions, installation, performance and artist’s book. She graduated in Graphic Art from Vilnius Academy of Arts in 1995, where she also earned a Master’s degree in Painting in 2013. The artist was awarded the Grand Prix of the Tallinn Print Triennial In Exile (2004) and the Grand Prix of the International Triennial of Graphic Art Transfers in Prague (2007). Kuckaitė’s interdisciplinary work extends the intimate sphere into broader contexts, reflecting on both personal experiences and the themes of nature, culture, and the female identity. 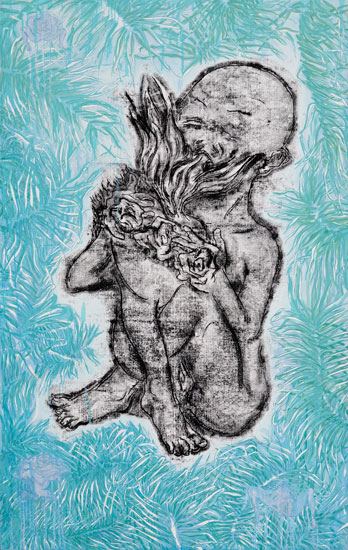