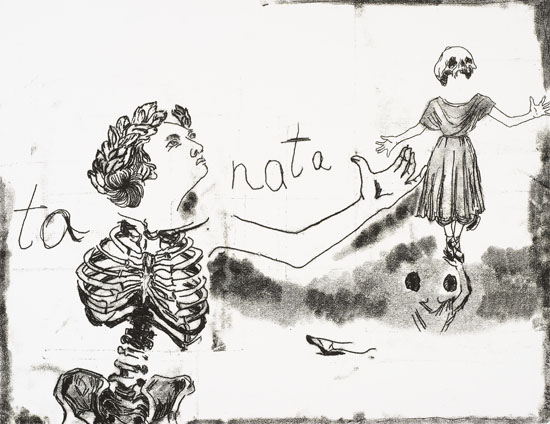 Moderator of the exhibition: Jurga Minčinauskienė

Organizations of the project: Lithuanian Embassy in Ukraine, Ministry of Culture of the Republic of Lithuania, Vilnius Graphic Art Centre and the gallery of Contemporary Art Centre of Kiev „Ja galerija”.

The contemporary Lithuanian graphic art in not accidentally represented by four artists of middle generation, namely Lida Dubauskienė, Eglė Kuckaitė, Eglė Vertelkaitė and Birutė Zokaitytė. They have graduated Vilnius Art Academy at similar time and soon acquired their individual ways of creation. They found their individual art languages. Today these creators are one of the most active participants in Lithuanian graphic art scene. Their creative work is widely presented in local as well as international art arena. In prestigious events of graphic art they are quite often evaluated and receive the highest awards. 36 imprints are presented in the exhibition, which are made by using mainly traditional graphic techniques. In spite of the uniqueness of these authors, close motives twist around in their artistic languages as well as themes, plots, states. What is especially apparent is the interpretation of a woman’s image and the feminity theme, which is connected with biological, social and cultural oneness of the woman.

The exhibition presents a cycle of imprints created by Lida Dubauskienė, which were created during the latest years. This cycle of imprints, under the title “A Room” attracts attention because it does not have a plot. This forms a specific principle for “reading” and analyzing artworks, which is independent from context (still) popular in art (cultural, political, social, etc.).

In the exhibition of Eglė Kuckaitė, which is one of the most interesting Lithuanian artists of today, monotypes are presented. The monotypes are distinct by their simplicity and elegant finesse. In the cycle of monotypes, as in the whole creative work of the artist, images of a woman constantly being analyzed appear very different and associative.

Eglė Vertelkaitė – the only one of the participants in the exhibition who combines traditional and digital graphic art. The characteristic features of the artist’s graphic works are usually deliberately lengthened horizontal flats and linear structure. Lines that the artist draws manually on the surface of canvas remind of minimalist and unrelated parallels. In imprints they become hidden messages and metaphors.

Birutė Zokaitytė is mostly interested in the traditional woman - since this is who she is - hiding behind a mask of a careerist or feminist. In other words, being a careerist or feminist is not the same status, framed in time, as pregnancy, cooking, flight into cosmos, brushing of the daughter‘s hair or fighting for the home country. Because what is feminine is the soul or psychological status (since even men happen to have feminine souls!) – that is what the artist visually presents in her creative work.